So it’s practically the law that I have to see We Are Scientists play live at least once every year, so I’m pleased to say this has now been accomplished in the dying weeks of 2019.

When the gig was announced it was part of their With Love and Squalor “50th Anniversary Tour”. It has actually been 14 years since their first (well, first official) album was released but I guess 14th anniversary wouldn’t necessarily draw in the crowds. On the real 10th anniversary the band played 2 special album-in-full gigs in New York and LA, then a one-off in London. At the time I wasn’t bothered about missing out on these. Whilst WLAS is a fantastic album that I still listen to now and again, I feel like I have heard pretty much all the songs live many a time and I much prefer seeing their newer stuff performed on stage. I’m not generally a fan of anniversary tours, preferring not to dwell in nostalgia but rather look forward to what’s next. However, a WAS gig is a WAS gig and as it has been a whole 16 months since I last saw them, a ticket was duly bought. 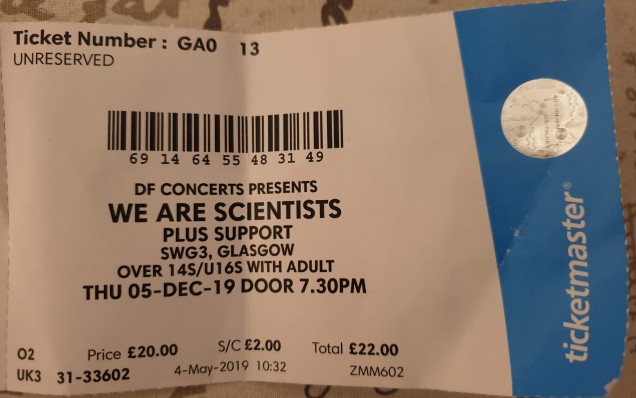 The day of the gig saw Glasgow drenched in rain and battered by winds. Lovely. I had dropped my kids off and headed into town, forgetting that SWG3 doesn’t really afford the same opportunities for mooching around before a gig as the city centre venues do. So I sat and waited in my car as it got buffeted by the wind. Thankfully the rain eased off before the short walk to the venue so I didn’t arrive dripping wet. Been there, done that too many times. Often in June.

I’ve been to SWG3 twice before, once for Belle & Sebastian in the outdoor area and once for Major Minor Music Club gigs for kids, which I think was in the TV Studio. This time we were in the Galvanizers.  I used to go past what is now SWG3 on the train all the time and remember seeing the actual galvinizers yard in operation, so it was pretty neat to see the building repurposed in this way. Once in, I found a couple of friends, then settled on my barrier spot.

The support band was Marsicans who I seem to have heard/read about a few times but never actually seen or heard properly. They were lively, energetic, fun and succeeded in bringing the crowd in without it being forced or premature.I like a support who proves their worth, and these guys put on a good solid show, with some nice tunes, interesting turns and gave off a really positive and uplifting vibe. I’m not sure I’d seek them out specifically again, but if I saw them as support or on a festival bill I’d definitely be interested.

In between bands I got to thinking about how often I’ve seen WAS now. By my reckoning and a quick consultation of this very blog, I think this gig was number 17 or 18.  Since 2008, as I came “late” to the party and missed the original WLAS tour. If you are thinking that’s still a lot, I know some people who run into the 30s with their count….

So the WAS show was split into 2 parts – the WLAS album in sequence, then after a short break they came back to do a mixed set from their other albums.

The WLAS part was a lot of fun. The crowd were clearly there for it, and everyone was singing along. My fellow barrier buddies and I sang literally every single word and it was great to share in that collective experience. Although I would gladly ditch songs like Callbacks, Cash Cow and It’s A Hit from any and every future setlist, I still sang and danced (wiggled my ass off if you like) and punched the air on the chorus high points. The Scene Is Dead, Can’t Lose and Textbook are still among my favourite WAS songs ever and it was particularly special to hear Lousy Reputation (that bassline, ooft!) live, it doesn’t often make a normal setlist.

On to the second act. I was actually looking forward to this part more. It was nice to see Ghouls make a reappearance as the opening song, and Chick Lit sat nicely in there too, although I was happy to see plenty songs from Megaplex and Helter Seltzer.

They played KIT!!! Wow. It was beautiful, Keith’s voice so clear and strong over a muted but driving bass and drums. Keith commanded the attention with his vocals but it’s always worth checking out Chris and Carne during these songs, they are always doing something interesting and often unexpected. I actually preferred it without the whistle/flute/whatever over the top, that always reminds me of Orange Walks and makes me feel a bit uncomfortable. Anyway, KIT was the high point of the gig so far for me.

Until they played No Wait At Five Leaves. What is it about that song that gets me every time??? If I was open-mouthed enthralled during KIT, I was welling up during Five Leaves. The stage lights were low and moody, the song resonated around the huge, high-ceilinged room and the frequencies somehow met my own and swept me into the song and the song into me and I was overwhelmed. This. Band. These. Guys. They are doing it again. I love it and I love them.

They finished part two with Nice Guys then a short encore of Dumb Luck (yeah I could also so without either of those in any future setlist, sorry) and we were done. Afterwards we headed towards the merch stall. There was an impressive array of cat-themed items for sale, including a tea towel and a babygrow. Between waiting to get paid for some freelance work and the amount of WAS merch I already own (off the top of my head – CDs, vinyls, 1 mug, 2 tote bags, posters that are now in drawers, 3 setlists, 1 lyric sheet, badges, a wristband, 2 pairs of underpants, numerous t-shirts, 1 hoodie and quite probably other items that are stowed away) I felt that I should pass this time round. I did however have a good catch up with Carne and said a quick hello to Chris, although unusually couldn’t think of a thing to say to him. He did, however, tell me that they were working on new material for next year which was good to hear.

Comedy moment of the night – when a group of girls at the merch stand were urging Chris and Carne to draw a “boaby” on their posters. Then explaining to Chris and Carne what a “boaby” is in this part of the world. For the record, Chris went for an abstract approach with a worryingly angular boaby and Carne went full-on realism with a little more attention to detail than was strictly necessary for a boaby on a cat poster.

Sweet moment of the night – when a burly security guard approached Carne asking for a copy of their record, then shyly asked if he could have it signed.

So I’m still not sure about the whole anniversary gig thing. Whilst it was good to hear some of the lesser-played songs from WLAS, I would much rather have had them randomly thrown into a regular setlist. Saying that, judging from the proper tour bus and the bigger lighting rig they have on this tour, if it hadn’t been marketed as such then this tour likely wouldn’t have happened and we wouldn’t have been treated to a rare 90 minute long WAS show. I’m still much more interested to hear what they have to offer us on their next album, but it was good to catch them at least once this year.