Since I became a jazz music convert, I have been looking for another live concert to follow the incredible experience I had attending a gig at the Glasgow Jazz Festival last year.  Several months ago I saw an advert for the James Taylor Quartet coming to the ABC.  I wasn’t really familiar with them, so I consulted my jazz guru (aka my cousin Adam) who described them as “funky mofos” so of course I bought a ticket.

On arrival at the ABC I was disappointed to find that the gig was in the smaller hall.  There also must have been some issue with the planned support band, because instead there was a DJ playing.  I had arrived quite early, due to coming straight from dropping the girls off and wanting to get in out of the cold, but I had come on my own so didn’t relish the idea of sitting soberly alone listening to a (admittedly good) DJ, while everyone else was drinking and chatting.  Luckily I bumped into someone I know, so that helped pass the time until the main act came on.

At first the audience hung back, a large semi-circle forming in front of the stage.  After a few numbers we were encouraged forward.  We were at the front and remained so, getting up close to the action. 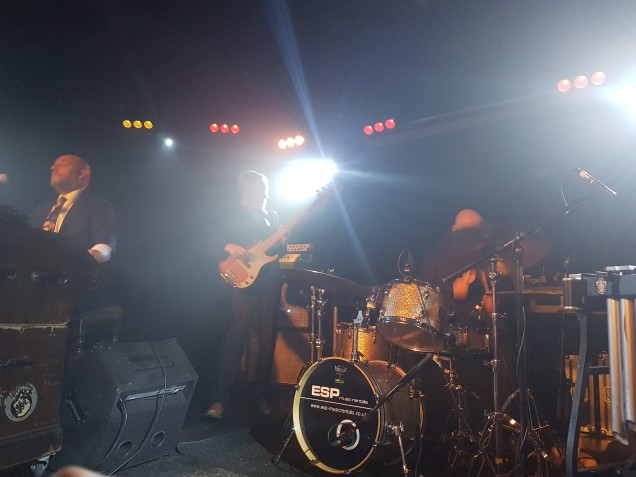 They were indeed funky mofos.  James Taylor himself was on the Hammond organ and occasional vocals, the rest of the quartet made up of vibraphone, bass and drums.  I wasn’t really sure what to expect from the gig, and to be honest so far in my jazz journey I’m not a huge fan of the Hammond organ, so going to see a Quartet with an organ-playing band leader could have been a disaster, but they were such incredible musicians, it was fascinating to see them at work in such close proximity.

The range of pieces they played swung from the slower, soulful end of the spectrum to the cinematic 70s soundtrack end with a good helping of energetic jazz-funk in between.  Apparently one of their signature tunes is the theme from Starsky & Hutch.  The crowd went mad for this, and we were encouraged to sing along “ba-da-ba-ba” style.  Now I have never seen a single episode of Starsky & Hutch and only vaguely recognised the theme tune.  I felt quite exposed right there in the front not having a clue what was going on, but thankfully the rest of the audience carried it.

As was to be expected from such an established band, the musicianship and skill on show was first class.  In true jazz style, each got their turn to showcase their talents, either playing solos or 2 members holding back while the other 2 took their turn to shine together.  All were phenomenal.

I enjoyed the music more than I thought I would.  Given that it wasn’t the flavour of jazz that I have most gotten into, the live experience spoke to me in ways I hadn’t anticipated, even if it didn’t quite elicit the same raw emotional response that Nerija did.  Saying that, on more than one occasion I wished that JT was playing a piano instead of the organ.  I know that would have made for a completely different outfit and would not have suited the style of music they play, but the stage set-up meant that he was almost completely obscured by the organ itself, we couldn’t see him actually playing it, just the top of his head bobbing up and down behind it.  I kept thinking that if it was a piano, and we could see his hands, I would have a much greater appreciation of the skill involved in producing the sound.  But that is probably my ignorance as a novice to this genre showing through and I apologise to the hardcore JTQ fans who wanted to kiss his hands after the performance.

Luckily I was able to focus my attention on the rest of the band, and particularly enjoyed watching the vibraphone player.  As someone who tried playing tuned percussion back in the day and could manage very well with 2 beaters, but turned into a fumbling buffoon with 4, I applaud anyone who can make 4 beaters dance around the notes and produce an intricate, complex melody without dropping anything.  The bassist was the funkiest mofo of them all, and the drummer was of course mesmerising to watch.  As I slowly but surely make faltering progress playing standard rock, the elegance, finesse and artistry of jazz/funk drumming is the epitome of beauty on the kit which I can only dream of replicating. 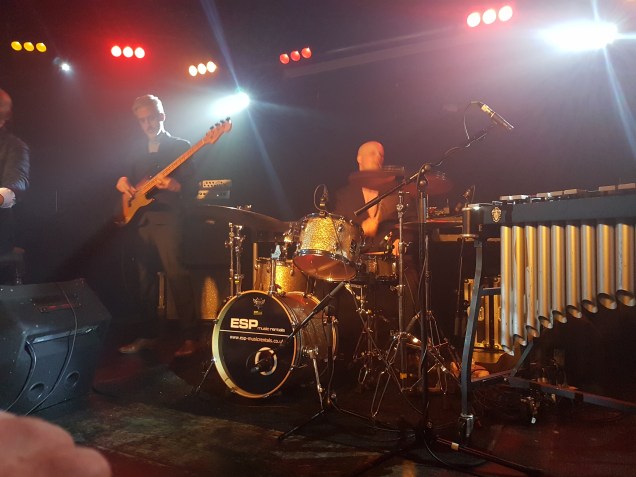 So all in all a good night, where I stepped out of my comfort zone a touch, but was rewarded by seeing one of the UK’s most experienced bands perform a highly engaging and immersive set which both awed and inspired me.