Skip to content
Once upon a time, the West End of Glasgow was pretty much home. I lived there as a student, and in neighbouring areas for several years afterwards.  During that time, I would always take in some of the annual West End Festival’s events.  Now that I live out in the suburbs (eww, do I?) I may browse the programme now and again, but I had got out of the habit of delving in.  However, this year, when PAWS announced that they would be featuring in the WEF’s “All-Dayer” – a not-quite-all-day multi-stage event at Oran Mor, I had to get on board.  It may not be the most highbrow of the WEF’s cultural offerings but frankly, I need some loud rock music right now more than I need the Bard in the Botanics.
The day turned out to be a hot and humid one, not ideal for heading into a converted church venue late-afternoon.  I’m not sure what ticket sales for the day were like, but I suspect a large portion of people who had bought them decided to ditch the gigs and park themselves in a beer garden instead.  It was a tempting thought.
Instead, I first headed upstairs to the “Auditorium” to catch Kid Canaveral.  I saw Alasdair Gray’s painted ceiling for the first time, and it is impressive indeed. 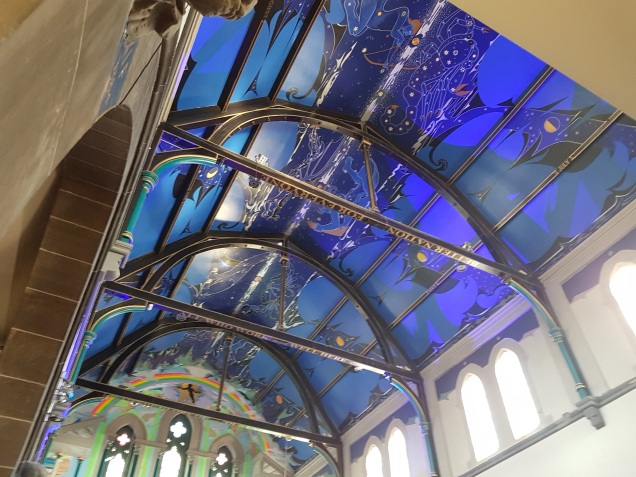 Kid Canaveral are a band that I have listened to occasionally, usually when they have cropped up as “related artists” to something else I have been listening to.   They are part of that folk/rock scene that I dip into now and again as the mood takes me.  As a live act, they come across as more rock than folk, but the intricacies of melody and harmony remained to give a softer, more aurally interesting presentation.  I was impressed and would definitely actively seek them out from now on, both to listen to and to see live if the opportunity arose. 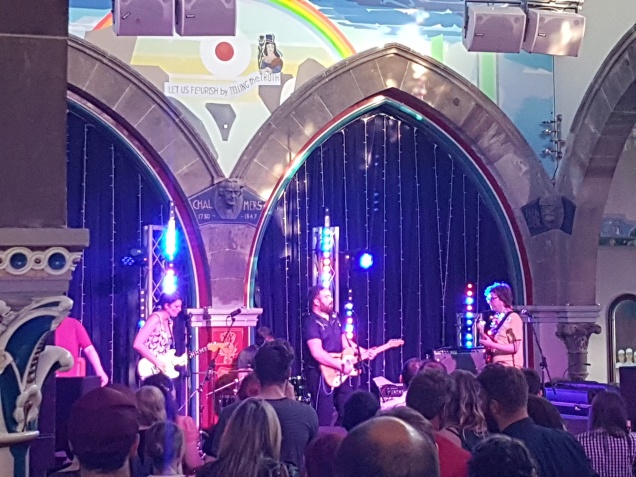 The surroundings lent an added dimension to proceedings, with the late afternoon sun streaming in the stained glass windows and lead singer David’s anti-Tory semi-rant against the backdrop of Gray’s mural depicting the words “Let us flourish by telling the truth” particularly poignant. 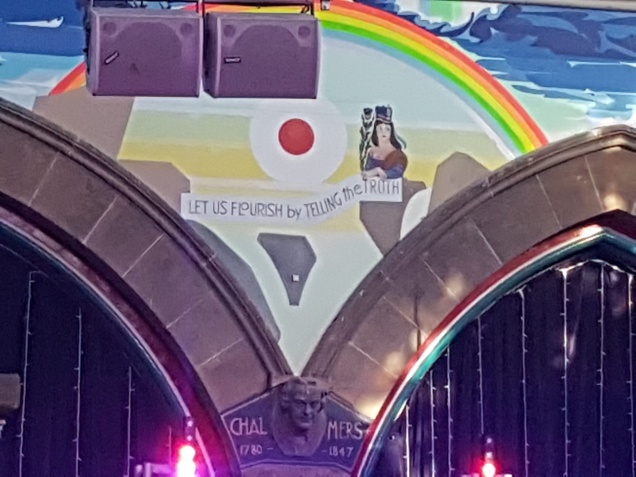 The room was sweltering and the sun was still shining outside.  I had an hour or so gap in between bands that I wanted to see, so I headed outside and took a walk around the Botanics.  No Bards though.
Back inside Oran Mor I ventured into the basement, and while the decor was less salubrious, the air conditioning was fully functioning.  I was keen to get a good spot for the headliners, PAWS, so thought it would be worth getting there a band early just in case it was busy.  It was not busy.  It was dead.  The preceding band were called Bloodlines, and clearly had ambitions to be the next Biffy Clyro. The lead singer came out all swagger, verging on aggression.  The crowd was tiny, and dispersed around the room at side tables and the bar.  He thought the best way to get us down the front was to swear repeatedly at us.  It didn’t work.  As their set went on, more people entered the hall and a slightly larger group formed.  Their set was standard shouty-rock.  Only 1 song, Mothers Misery, had some depth and left a more favourable impression.  The singer removed his top, further enhancing the Biffy-wannabe status, which was later cemented by several songs that were pound-shop rip-offs of Biffy.  On their last song, the singer wanted to crowd surf.  But there was no crowd. So he leapt off the stage, physically rounded up people in the room, forced them into a small pack at the front, then “surfed” them for about 5 seconds.  Mate, if there ain’t a crowd ready and willing to catch you and hold you aloft, don’t engineer one just to fulfil your rock star ambitions.
PAWS were up next.  As they set up, people began to drift down to the front, so I edged my way among them.  It still wasn’t a large crowd, but the room gradually filled.  PAWS have quickly become one of my favourite bands, due largely to their live shows.  This one was slightly different in that the crowd wasn’t full of PAWS fans.  It was my first PAWS gig where I wasn’t squished and trampled seven ways throughout.  Weirdly, I missed that.  The absence of the uber-fan posse was evident during songs that usually elicit mass sing-alongs/shout-outs such as Get Bent.  I won’t repeat the lyrics here, but if you are not familiar – look it up and you can probably make a guess as to which lines are usually belted out with great enthusiasm.  Saying that, as the set went on, I think the band began to win over the audience, and I could detect increasing warmth and appreciation from behind me, and for the encore, there was a definite push forward as people were eager for more. 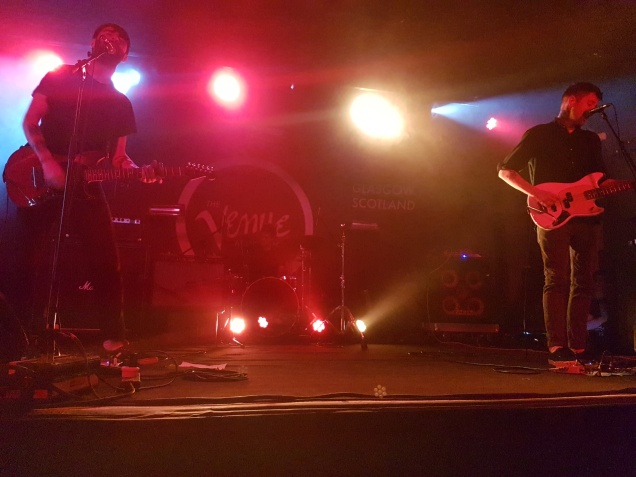 I am always moved by Philip’s passion and emotion in his lyrics and delivery, combined with the raw energy and sheer noise that just 3 band members can generate.  Josh’s drumming, once again, is awe-inspiring.  I have seen him play….5 times now and still don’t know how he does it. He looks so uncomfortable and out of control, yet plays so precisely and with such skill. He frequently mended/reinforced his sticks with gaffer tape, and often tested a couple out to see which would hold out longest.  I want him to come on with a supply of 50 sticks to see him through the set, but apparently, he prefers the gaffer tape method. Perhaps they don’t want to blow their fee on an endless supply of sticks. Amazes me every time. 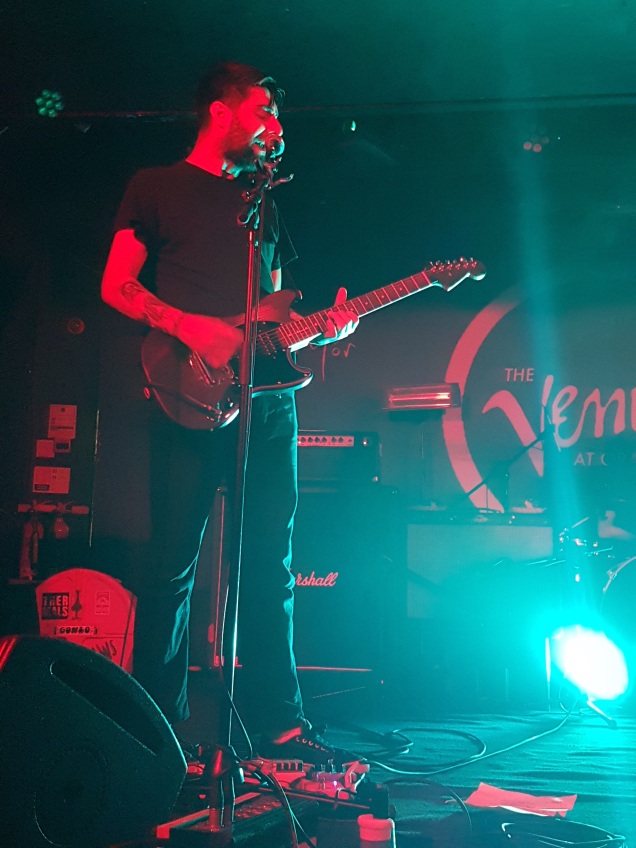 So they ended on a high, with a proper encore – every time I have seen them previously they have just blasted through without adhering to the ritual of leaving, then returning to the stage.  The crowd by this point was a crowd, had Philip felt the urge I’m sure he could have crowdsurfed without any prior audience instruction.  The band have certainly won some new fans and proved themselves capable of headlining such a large, prestigious event.  Even if I prefer the small sweaty clubs, it’s good to see them doing well and gaining recognition.
So out into the night, which was still light.  A good not-quite-all-day. 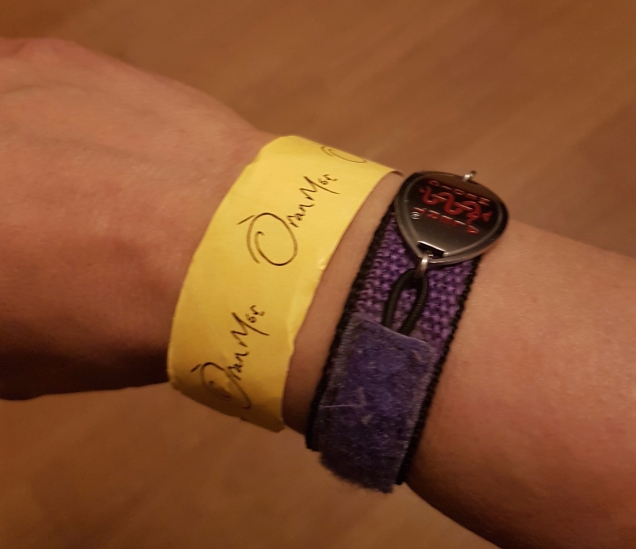